From Byzantium to Medieval: a Crossroads

An excerpt from a longer essay.

Abstract: This essay explores machismo as a predator treating women, especially mothers, as prey. The essay defines machismo, tracks its existence in northwestern Argentina, who it hunts, how the hunted become victims preying upon themselves through victimization, the aftermath of battle, the propagation of machismo until machismo in turn is itself hunted. The personal and the political meld as the author is an object in the case study. Key words: Machismo. Argentina. Ley 26.465. Gender Protection. Maternalist.

Machismo is more than an abstraction, cultural context, phenomenon of Hispanic and Iberian countries, more than even gender identity. Machismo is a man summoning with the fullness of his sex a woman who interprets the call as love and fecundity. The man reciprocates, honors her with responsibility for the tribe they create, but lies to himself and the woman he calls mi amor that their union is love when he goes with his sex in search of conquest. It is never love. Never honesty but violence. Abuse.

I begin with teeth marks on my mother's skin, she never told me where, and my father calmly washing the blood from the sheets in the washing machine so no one else would see. I must have already been born or was my mother still pregnant with me? Either way, my mother was trapped. She only mentioned the occurrence once. What remained with me was the ability of a man who I never thought of as machista to conceal his violence. The shame of my mother that prevented her from action.

I define violence as a violation of our actual and perceived boundaries. Machismo removes the boundaries of a woman's self. All is his. Machismo is an imposed violence, a normalization of violence. I lived with it for twenty-seven years.

I begin with questions as I rise beyond machismo, at first urgent, a way to proceed from a crossroads, a way to make decisions, which later became the scaffolding of a scientific study, a feminist inquiry.

How do we gain self-awareness? Do we gain it by experience, feeling pain, transforming it on the altar of our days? Do we gain it by immediacy? With distance? Do we gain it following the path of coincidence? Can it be gained? Do we go to theory? I shall use these questions as a guide to describe how a crossroads finally presented itself.

As mothers only self-awareness propels us to move beyond victimization by machismo, to grow ourselves again so our children can grow.

“The right to search for truth implies also a duty; one must not conceal any part of what one has recognized to be true.”2 When I first read the words engraved across the enormous bronze statue of Albert Einstein slouching on Constitution Avenue in Washington, D.C.for children to climb, it seemed as if a path presented itself to me. I would try to understand what had happened. I had a duty to myself, a duty to my children, to discover the truth. Across Einstein were also added “Joy and amazement at the beauty and grandeur of this world of which man can just form a faint notion.” The path of exposure led to something more. Einstein knew there was more beyond. I knew it, too, when I was twelve. I know it now again. The search for truth uses exposure as a tool. The first poem I wrote when I realized my second marriage would end was called “Exposure”. I did not know then that exposure takes courage.“Freedom is not free,” echoed Martin Luther King from his monument across the way at the Tidal Basin. It has responsibility, I added.

The lights along the New Jersey banks bored amber and burgundy reflections into the Hudson River tunneling holes of color into the water. If I hadn't walked at this moment, needing to speak to the river, needing the peace of water, empowered by row upon row of reflections at dusk, I would not have thought about beauty and vision. Survive the ordeal. Write about it with humor and grace I am told. For beauty arises from vision. Understanding comes later. During my second marriage I desired to see. I wanted vision for a long time. I did not know then the patterns of a life. I only desired perspective. Knew distance was necessary. I went to other women writers, to mystics of the medieval ages. I did not even perceive the patterns of victimization until I finally went to the Argentine courts one Monday, April morning in 2016 after twenty-seven years of marriage and cried ceaselessly until I admitted in Spanish no puedo más.

Machismo is so embedded in the culture of South America that it becomes the expectation for each generation of men and women. The word macho originally captured the ideal societal role men assumed in their communities. Machos in Iberian descended cultures had to possess and display bravery, courage, strength, wisdom and leadership, so much so that boys aspired to be macho.

Machismo began with positive virtues, with the sense of being manly, with self reliance. Associated with it was a man's responsibility to provide for, protect, and defend his family. After the conquest of the New World backed by the Roman Catholic Papal Bulls of 1455 and 1493 which sealed with a lead bulla the right for the monarchies of Portugal and later Spain to colonize, convert and enslave people as subjects, machismo degenerated into pride, one of the seven deadly sins, transgressions of the Catholic religion. Only later did it decline into dominance and finally femicide.

Macho se transformó, transformed itself, as if a social phenomena could become reflexive like certain verbs in Spanish whose action reflects back upon the subject. Macho became a man having two relationships with a woman at once, a man who denied the reality of either woman to the other or to his own family, whether his children or his parents. A man caught in a lie of his own doing with time becomes a sociopath, sometimes even murderer. I knew none of this when I went to Argentina to follow the man who I thought had wanted to open my heart when I first met him in California. When I evicted my husband twenty-seven years later I feared for my life. Now almost four years later I am still afraid.

From Byzantium to Medieval: a Crossroads

The Magic Bed of Tucuman 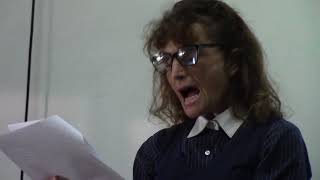